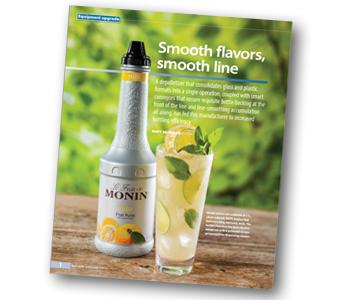 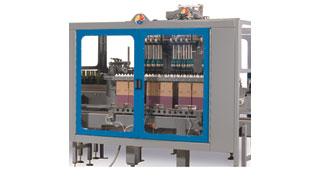 Packagers who need to run multiple sizes and packs of bottles will appreciate the quick-change features of the Model 101 case packer that can reduce downtime up to 30% compared to conventional changeover practices. This packer is designed with complete gripper assemblies for all pack/bottle patterns that each packager requires to eliminate time-consuming gripper adjustment, and guide rail placement is simplified with sliding and locking handles to allow quick adjustment to the new specification. In three steps, the changeover is completed:

1- unbolt and replace the gripper assembly

3- select the new container style at the operator control panel, which activates the proper machine actions for the new product/case handling.

The Model 101 packs glass and plastic bottles, jugs, jars and specialty shapes, as well as metal and composite cans and many styles of cartons. The servo-driven pick and place operation ensures gentle product handling to maintain container and label integrity, and containers are packed under full control from the conveyor to the shipper. From lightweight glass bottles to heavy, industrial-sized containers, the Model 101 packs with gentle precision. 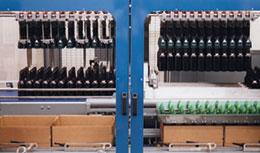 A-B-C offers an automated packaging solution for craft brewers who manually unpack and repack bottles in reusable (reshipper) cases. It’s a compact, all-in-one machine that performs both uncasing and case packing with every motion of the servo-operated robotic-style transfer head. The Model 360 eliminates manual labor, provides gentle handling, and ensures a consistent bottle feed to the production line–at a conservative cost.

Here’s how it works: cases filled with empty bottles are fed on a conveyor to the Model 360. In every cycle, two separate actions occur: the unpacking head grips and lifts the empty bottles and places them on the conveyor to be transferred to filling, while the packing head picks up and packs finished bottles feeding from the production line into the emptied case. The servo-operated transfer head smoothly and efficiently carries containers with no drop and keeps them under complete control during operation…bottles are released only when they reach the bottom of the case during packing, or the conveyor for unpacking.

The Model 360 uncases and packs 12 oz. and 22 oz. bottles at speeds to 15 cases per minute. Its 2-in-1 footprint saves money by reducing the floor space and machinery investment when compared to the size and cost of separate uncasers and case packers. 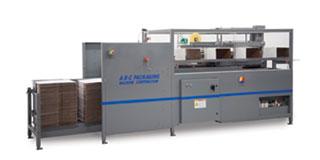 Key production features include an ergonomic, low-level KD magazine that is easy to load and includes automatic stack indexing that frees the operator for other tasks. The top-feeding KD magazine accommodates warped and band-marked cases and the cam-operated erecting arm over-opens cases by the outer flaps to ensure reliable inner flap folding. A mechanical main drive powers the walking beam case transfer that positively squares cases as they travel.

“We designed the Model 300 case erectors to give packagers in the 15-25 cpm market a solid production machine at a reduced price point. Our markets include food and dairy processors, snack manufacturers, small beverage companies, petfood manufacturers, household, personal care, and chemical manufacturers,” said Bryan Sinicrope, A-B-C VP, sales and marketing. The Model 300 is available in both tape and adhesive sealing models. 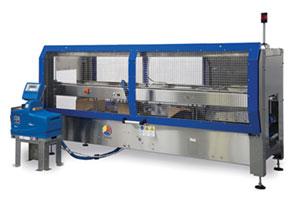 A-B-C offers an all-stainless case sealer for dairies and juice plants with washdown requirements and other manufacturing plants with acidic or caustic environments that demand stainless equipment to withstand these harsh conditions. With fully stainless construction from the frame to the fasteners, bearings, chain drives and a NEMA 4X-rated control cabinet, this sealer ensures top productivity in rugged conditions with hot melt sealing speeds to 50 cases per minute.

Total flexibility to run a full range of corrugated cases with only three manual adjustments is a top feature of the Model 436. On dairy lines that also run plastic crates, there is no need to build a bypass conveyor around the sealer–simply set the sealer to bypass mode and the crates cycle straight through to palletizing. To return to corrugated cases, the machine is reset to sealing mode with one easy adjustment.