A tradition of quality, innovation and service 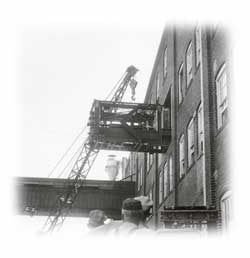 Going the extra mile required a little innovation as this custom case sealer for washing machines was transported by crane from the railcar to the customer's packaging floor. The sealer's oversized frame made it too large to move through the doors of the Maytag production plant. 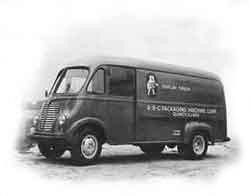 Loading up a truck with a case sealer, A-B-C originated the traveling packaging show. The van traveled across the nation, bringing A-B-C's new technology to the plant door. 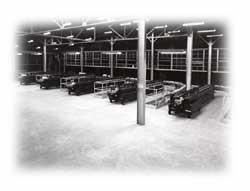 A-B C packaging machines were valued for their reliability in glass plants, where they operated 24 hours a day. These semi-automatic case erector / sealers fed the glass packaging lines on the production floor below. 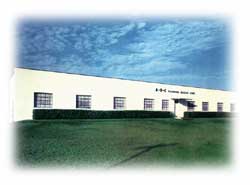 The Tarpon Springs plant was acquired in 1955. Today the headquarters of A-B-C occupies this location, with a new, larger building that includes engineering, sales and production. 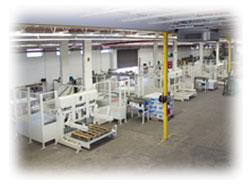 Today, A-B-C machines travel from the production floor to customers' plants in many different industries around the world.

In 1940, in the town of Quincy, Illinois, Morris P. Neal founded A-B-C Packaging Machine Corporation. An engineer by trade, Mr. Neal designed the original box makers and sealers that automated the packaging line. A-B-C equipment became known for its simplicity and reliability and the company's success grew. Soon, the product line was expanded to include bottle and can handling equipment and reshipper bottle decasers.

By the 1950's, Florida was the fastest growing state in the Union. Mr. Neal moved the company's offices to Clearwater and the manufacturing plant to Tarpon Springs on Florida's west coast, joining the thousands of Americans who sought the state's booming business opportunities and temperate climate. The move proved fruitful as the company tripled in size. The product line grew to include the first case sealers that used a new instant-bonding hot melt adhesive

On October 12, 1951, A-B-C became a member of the Packaging Machinery Manufacturers Institute (PMMI) and A-B-C management joined other packaging pioneers at a PMMI meeting at the Mid Pines Club in Southern Pines, North Carolina.

By 1981, virtually every blowmolder in the country was operating packaging lines built by A-B-C. A pioneer in adapting successful machinery innovation for American markets, A-B-C signed an agreement with Max Kettner GmbH in 1977, and was among the first U.S. companies to customize European bottle handling machinery designs for the U.S. packaging industry.

As the company embarks on the challenges of the 21st century, led by current president Mark Reichert, it is with a continued focus on quality, innovation and service. Over 79 years in business has shown that a firm commitment to serving customers will ensure mutual success in the future.